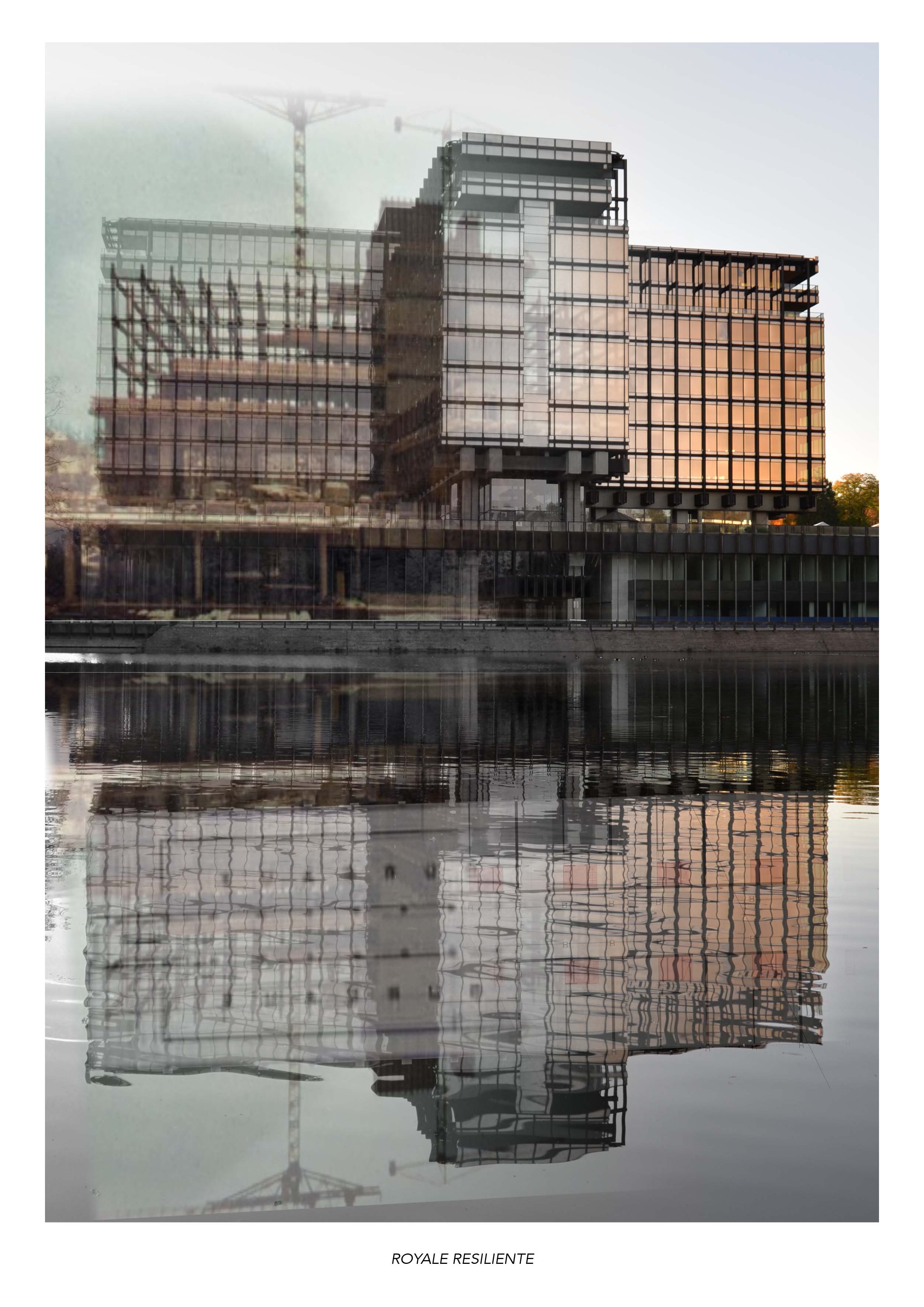 Our definition of built heritage is changing. In 1965, for example, the House of the People, a masterpiece by architect Victor Horta, was destroyed and replaced by a 26-storey tower called Blaton Tower. If today every least work of Horta is adulated, and the House of the People bitterly regretted, that wasn't the case at the time, where some found its architecture, at best, banal. It is therefore crucial that we be lucid, and that we be able to recognize what will be the heritage of tomorrow. The building of the Royale Belge in Brussels, now abandoned, is an undisputed example of the best architecture of the seventies.

The following project's objective is simple: how to convert this seventies office building into housing adapted to our time.

The project aims to transform this office building into housing by retaining a maximum of this heritage. But what should we keep? the structure ? the windows? the park ?That would not make any sense: this building is more than the sum of its parts, this built heritage is a whole.

Unfortunately, the building has been empty for a few years and after only thirty years of occupation, and it is difficult to find an occupation for it, as it has become unsuitable for today's expectations and way of life/work. Today, when you build a building of this size, it needs to be more resilient, lose a little specialization to gain flexibility - and thus guarantee a longer life. But when one reads the plans of Dufau and Stapels, with their open plan and their vertical circulation, one sees that this flexibility was already partly desired by the architect. And with a few simple gestures, it is possible to create qualitative housing.

The project begins by placing boxes containing kitchen, bathroom and other necessities, found at the same place on every floor, and finally two partitions. These homes are served by the central corridor, pierced every two floors to make the corridor brighter, create visual games that refer in particular to the vertical structure in front, and create more interesting neighboring relationships. More importantly, one enters the dwellings by a threshold whose withdrawal is created by the width of the columns. In addition to activating the corridor, this threshold, by its different level, its materiality, the coat rack then and all these gestures that one makes while passing the door of our home, makes it possible to create a sequenced arrival from the public corridor into the private housing and strengthen the domesticity of the housing.

We thus obtain a studio with a generous living room, and the box, able to accommodate a staircase, allows the merging of two studios into a three-bedroom apartment. This simple operation makes a myriad of scenarios possible:
- A young couple can buy a generous studio and rent out, during the day and week, the living room to a young company or an association looking for an office, facilitating their access to housing
- A couple whose family is growing up can buy an adjacent studio to merge them and get a three bedroom apartment
- Conversely, a couple whose children leave the household can either split the two entities again, or because of the relative autonomy of these two studios, opt for an intergenerational flatshare.
The plan also proposes other typologies, such as individual rooms, which will be found with less favorable orientations, with a common living room which is well placed; and a large apartment with similar rooms, suitable for both large families and roommates.

Each wing of the building has a plan of its own, adapted to its orientations.

Finally, the windows, which must be replaced anyway, can be replaced by windows also coppery but opening too. Depending on the design of the technical details, the impact differs, but by hiding the horizontal frames behind the opaque wall, we lose less than 4% of reflective surface, and with custom windows we can still lower this figure.
These large windows allow a living room fully open towards the outside, and offers residents a strong relationship with the surrounding park, and the facade to be animated by its inhabitants, breaking with the austere image that these offices back send back.

The project seeks to rehabilitate, by a few simple gestures, the building and adapt it to our time by making use of its inherent qualities. 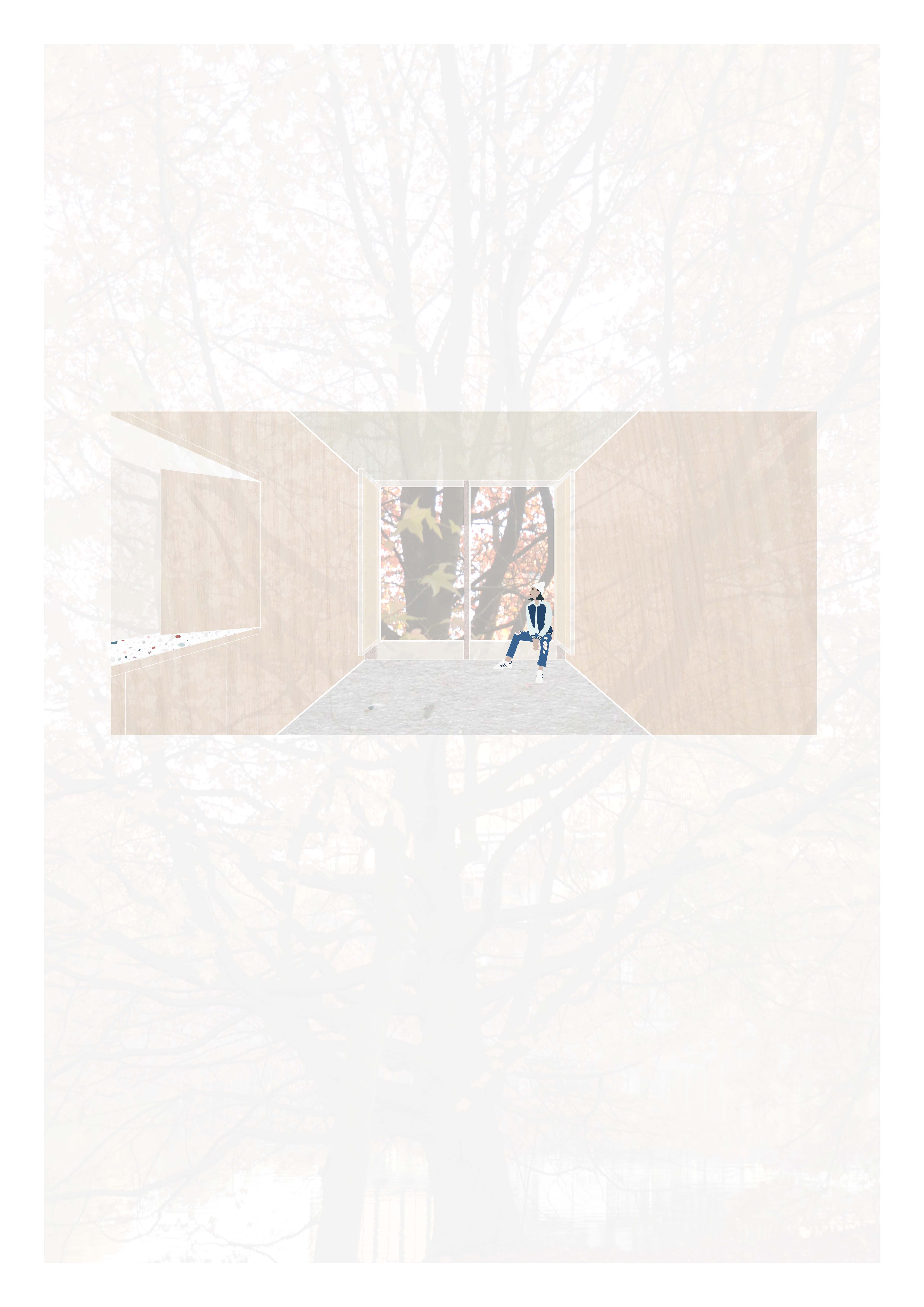 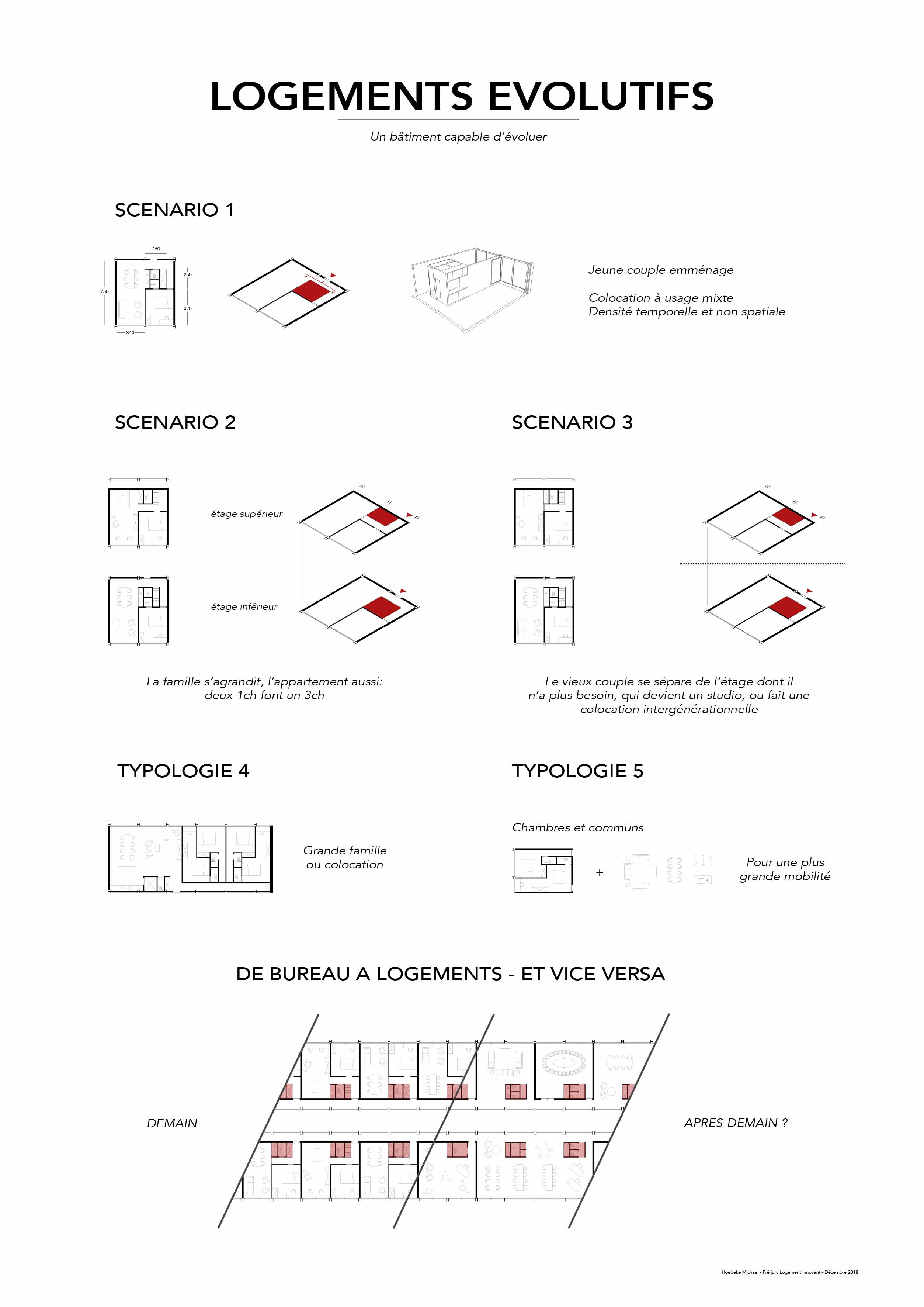 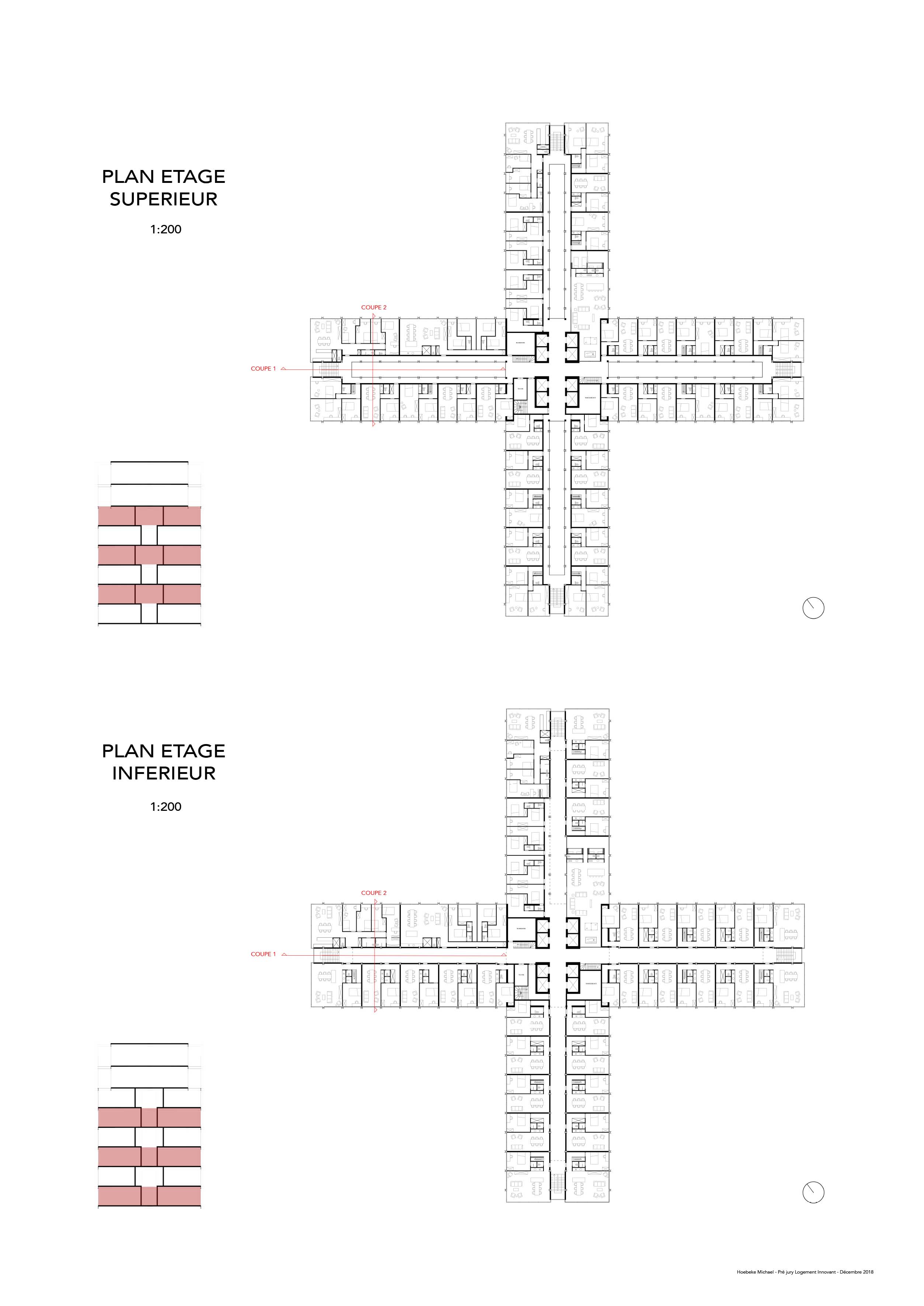 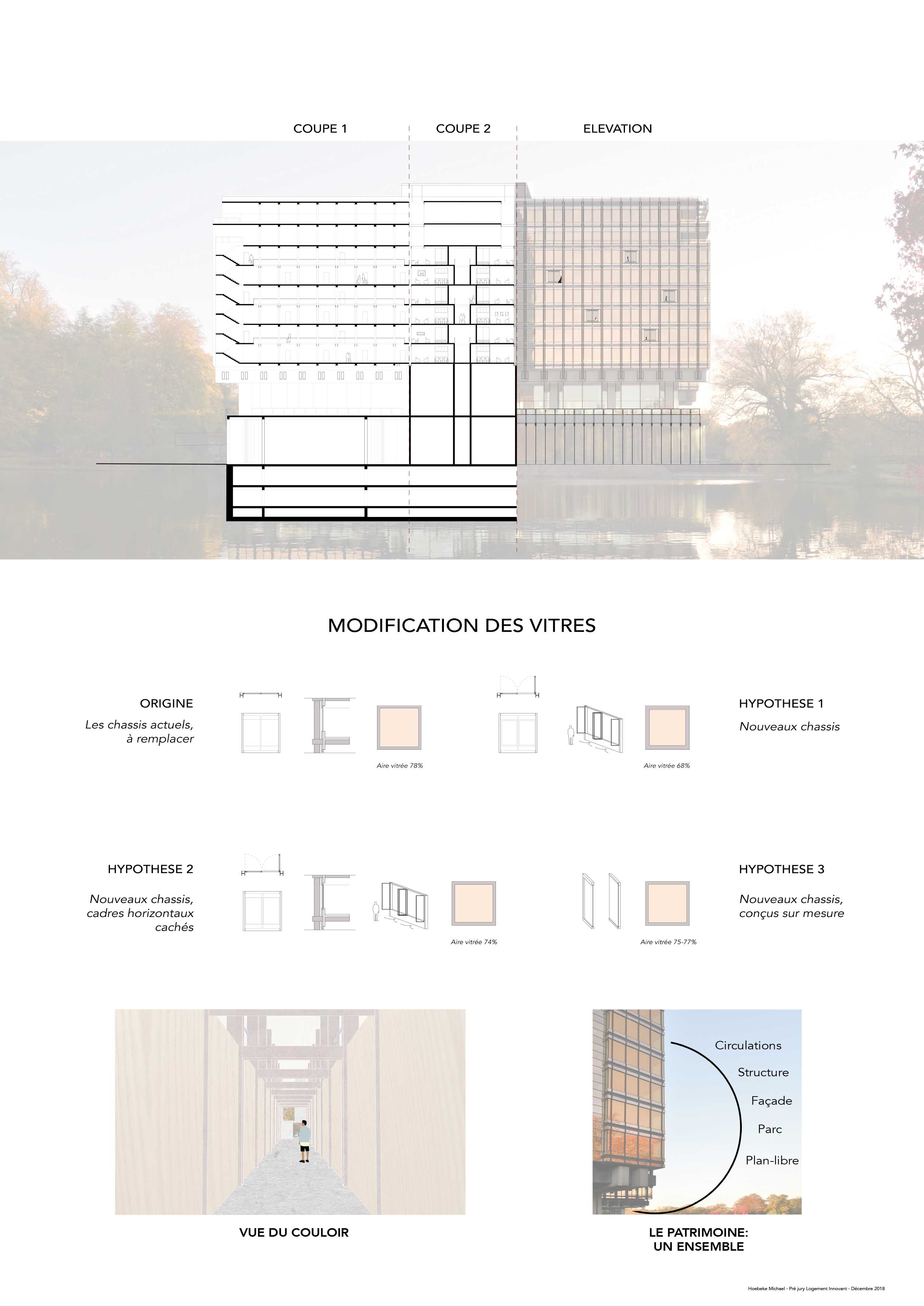 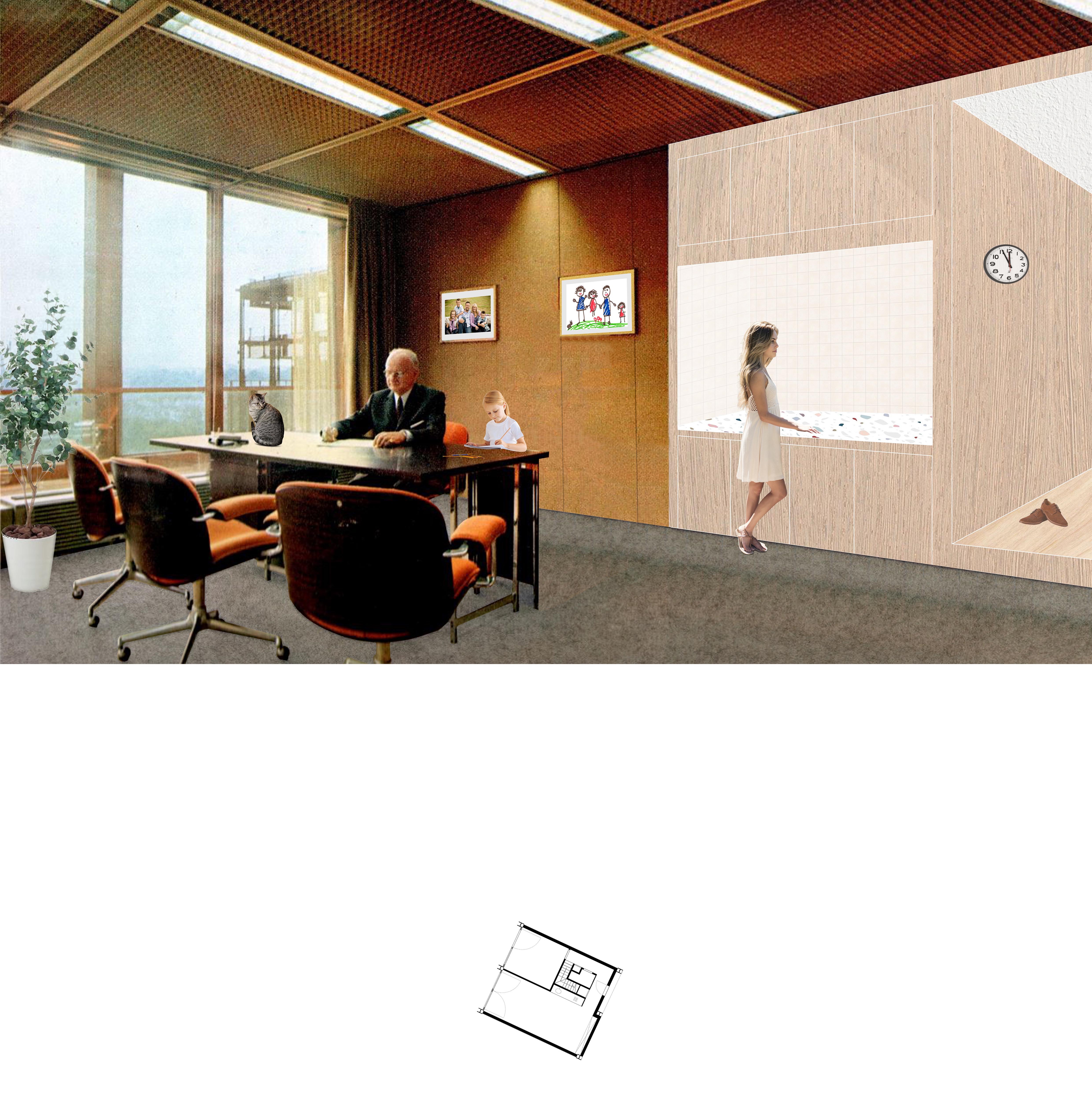